Your guide to the Solar System and the night sky
Latest Perseverance Images received 2 hours 53 mins ago for Sol238, Sol237, Sol236, Sol215
Please help keep TheSkyLive ads-free, DONATE NOW via PayPal!. This site cannot run without your voluntary donations.
Greenwich, United Kingdom [change]
We don't use Ads. If you find this website useful please consider a small donation, it will help covering hosting costs. Thank you!

HR2449 is a double main-sequence star in the constellation of Gemini.

HR2449 visual magnitude is 5.97. Because of its reltive faintness, HR2449 should be visible only from locations with dark skyes, while it is not visible at all from skyes affected by light pollution.

The table below summarizes the key facts about HR2449:

HR2449 is situated close to the celestial equator, as such, it is at least partly visible from both hemispheres in certain times of the year. Celestial coordinates for the J2000 equinox as well as galactic coordinates of HR2449 are provided in the following table:

The simplified sky map below shows the position of HR2449 in the sky: 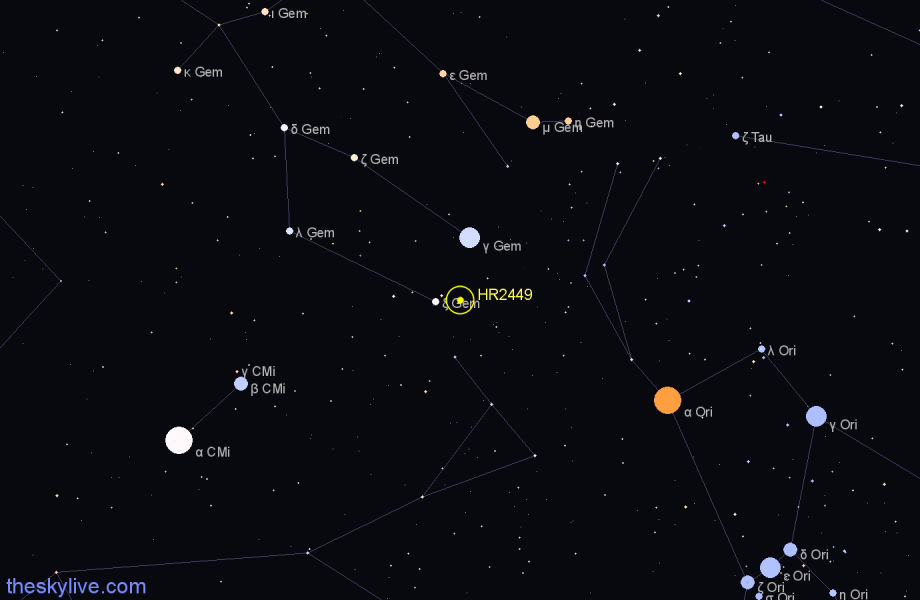 Visibility of HR2449 from your location

Today's HR2449 rise, transit and set times from Greenwich, United Kingdom [change] are the following (all times relative to the local timezone Europe/London):

The image below is a photograph of HR2449 from the Digitized Sky Survey 2 (DSS2 - see the credits section) taken in the red channel. The area of sky represented in the image is 0.5x0.5 degrees (30x30 arcmins). The proper motion of HR2449 is -0.034 arcsec per year in Right Ascension and -0.001 arcsec per year in Declination and the associated displacement for the next 10000 years is represented with the red arrow. 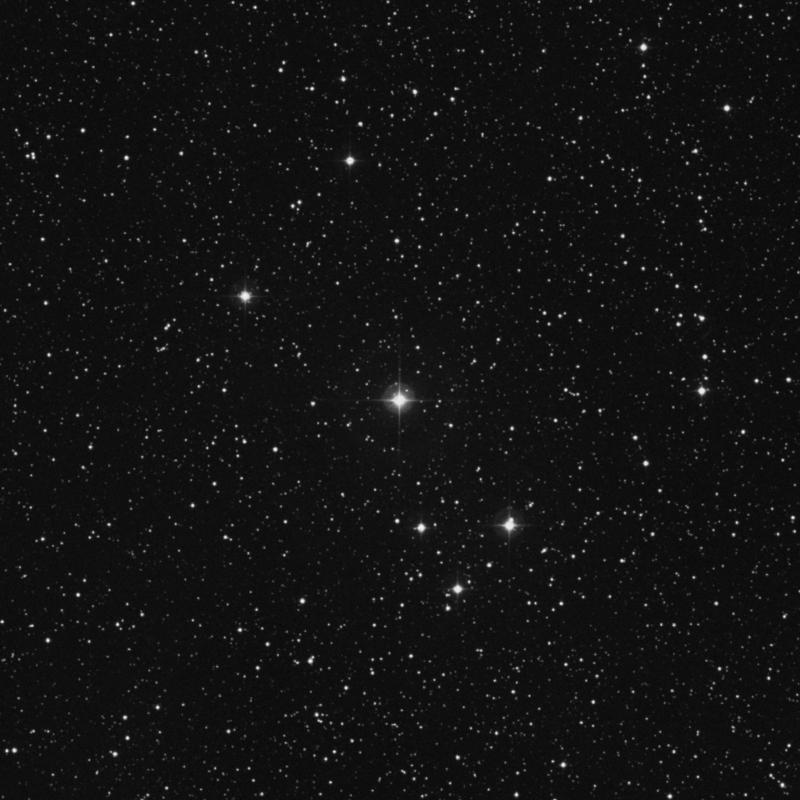 Distance of HR2449 from the Sun and relative movement

HR2449 is distant 289.01 light years from the Sun and it is moving towards the Sun at the speed of 20 kilometers per second.

HR2449 belongs to spectral class A2 and has a luminosity class of V corresponding to a main-sequence star.

The red dot in the diagram below shows where HR2449 is situated in the Hertzsprung–Russell diagram.

HR2449 is a visual double star which can be observed only with the help of very large telescopes. The table below shows key information about the HR2449 double sysyem: