Your guide to the Solar System and the night sky
Latest Perseverance Images received 8 hours 16 mins ago for Sol274, Sol272
Please donate now to help keep TheSkyLive ads-free. This site cannot run without your voluntary donations.
Greenwich, United Kingdom [change]
You won't see any ads here! If you find this website useful please consider a small donation, it will help covering the hosting costs. Thank you!

Compute Comet 67P/Churyumov-Gerasimenko ephemerides for any date and time between 01 Jan 1970 and 01 Jan 1970 and display the predicted position in an interactive sky map.

Where is Comet 67P/Churyumov-Gerasimenko?

Comet 67P/Churyumov-Gerasimenko is currently in the constellation of Cancer. The current Right Ascension is 08h 40m 31s and the Declination is +26° 57’ 55”.

Below you can see a simplified sky chart showing where Comet 67P/Churyumov-Gerasimenko is right now in the sky with respect to the brightest stars and constellations. More advanced sky charts for Comet 67P/Churyumov-Gerasimenko are available on TheSkyLive: 1) the Online Planetarium which is interactive and allows to select dates and additional objects to visualize; and 2) the Live Position and Data Tracker which provides the highest precision position data and features deep sky imagery from the Digitized Sky Survey. 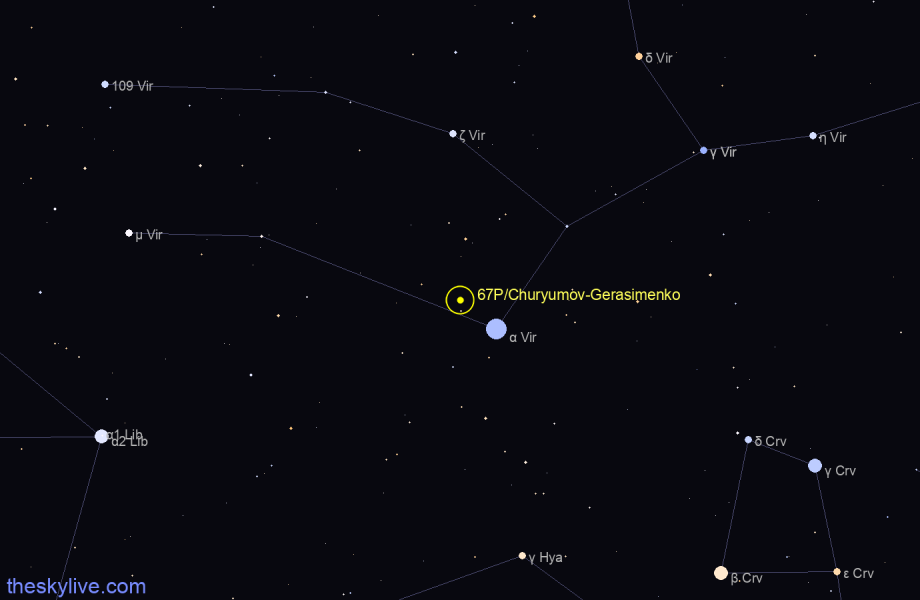